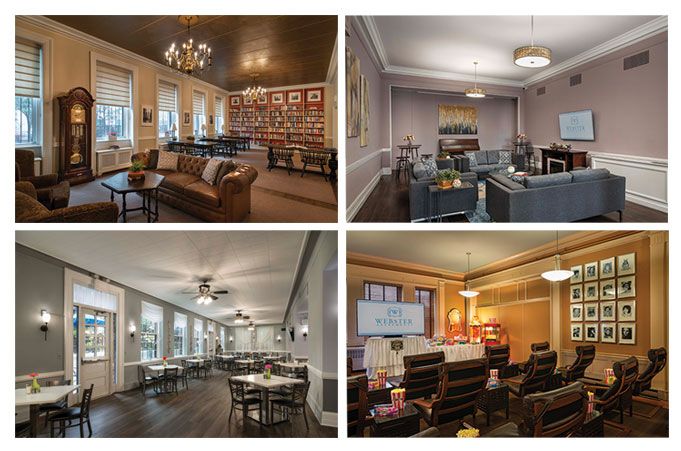 Residency in The Rehearsal Club wing at the historic Webster Apartments in mid-town Manhattan offers an opportunity for women forging a career in theatre, film and TV to live in a private sanctuary at an affordable rate. Modeled after the original Rehearsal Club, which became a theatrical legend for its impact on the American theater, the revived club provides room and board at a discounted rate, as well as extensive services including mentoring, networking and workshops.

Contrary to myth, The Rehearsal Club was neither a conventional “club” nor a star-making machine. From the start, the club’s mission was simple: to support young women of the professional theater until they were fully independent. It created an atmosphere that inspired its residents! Bonded by their common interests and goals, they helped one another develop the grit, wit and imagination necessary to carve their niche in the performing arts. And today they are still bonded in friendship for life!

TRC residents will be selected according to talent, passion, and commitment. Monthly rent is currently $1000 through 12/31/22, with a security deposit of half of one month's rent, a $50 application fee, plus a $20 credit check fee. The $20 credit check fee will be charged to the applicant by Rentberry, a contracted credit review company. A one time amenity fee of $100 is charged to each resident by Webster Apartments. Please see the Benefits of Residency for all the services offered.

The new TRC program requires residents to sign a Guest Agreement for three months of tenancy, which may be renewed. (Maximum tenancy lengths may be set.) Admissions will be juried through a virtual auditioning process. As space is very limited, applications should be submitted as soon as possible. Please see How to Apply on this site.

In addition to Performing Artists, TRC is expanding its Applicant pool to include young women in ALL theater, TV and film disciplines, including writers, composers, directors, choreographers, designers, stage managers and production assistants. As our alum Carol Burnett says, “When you have a dream that big, you have to go for it”.